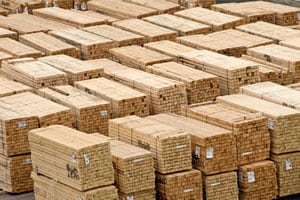 An overseas construction boom and constrained supply is proving a bonanza for timber exporters, but it could soon be hitting New Zealand home-builders in the pocket.

Usually a loss-making venture for timber growers, exporting logs is becoming a profitable option, putting supply to the domestic market under pressure and pushing up prices.

The Agri-Fax New Zealand log price index shows average log prices have jumped 23 per cent in the last year, and the industry is bracing itself for timber price increases.

Carter Holt Harvey is understood to have told one customer it is planning to raise timber prices by 10% in June and by up to 15% in October. Carters refused to comment on the rumour.

He could not confirm the figures.

As well as overseas demand, new timber strength requirements might also be leading to a shortage of wood meeting new specifications domestically.

Timber is the most widely used product for frames and wall trusses, “so any increase in the price or costs of timber products will flow through into costs of construction”, Burghout said.

Agri-Fax analyst David Meares said demand and prices for logs had been strong in Korea, Japan, India and China.

The “fly in the ointment” for New Zealand exporters was high shipping costs, which reflected high fuel prices and a shortage of space on ships.

Ocean freight rates to Korea, China and Japan are likely to hit record highs of $US55 to $US60 a metre this month and will be more than $US80 to India, Agri-Fax said.

Russia has also recently announced it is to increase export taxes on logs from 6.5% currently to 80% by 2009 in a bid to lift onshore production.

While there could be a surge in Russian exports to Asia till July, after that New Zealand’s log trade could benefit significantly, Meares said.

Peter Bodeker, chief executive of the Wood Processors Association, said: “You only have to look at the Port of Wellington to see how much stockpile they’ve got there.”

Burghout said depending on the level of price increase it might cause people to look at alternatives, such as steel or concrete blocks. A shortage of timber might also cause people to shift to other products.

Placemakers chief executive David Edwards said it was expecting price increases from suppliers in July, but not as high as 10%.

To remain competitive, Placemakers would look at absorbing lower levels of increases, but higher increases would probably have to be passed on to customers.

Mainzeal’s Auckland construction manager, John Hemi, said his company had not been told about the increases, and rises at that level would come as a surprise.

Timber prices did not tend to fluctuate wildly and usually rose at around the price of inflation.

If wood prices increased significantly, it could prove to be a “shot in the arm” for companies manufacturing steel stud framing, he said.

Hemi said if prices increased that much it could “potentially cause a problem” if contract prices were locked in.

As well as supplying the New Zealand market, it exports to Australia and the Pacific Rim.